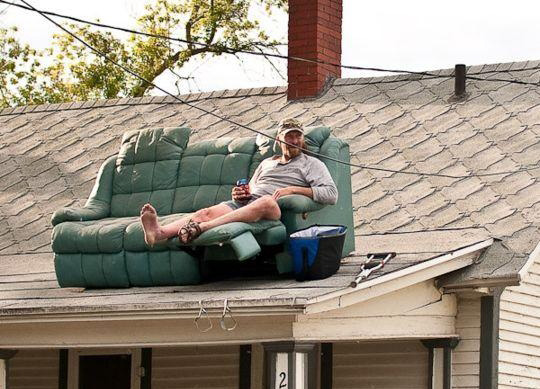 If you always thought that laws had to make sense, you are missing out of the fun of law. There are some pretty strange laws on the books when it comes to real estate in the United States. Laws that literally defy reason.

Here are some of the strangest real estate laws on the books today:

This tiny island is in the Puget Sound and it lies between Washington State and Canada. It doesn’t have a lot going on, though it does boast an elementary school and a post office. The ban on having more than two toilets was part of an effort to limit the development on the island. It may have worked because very few people live on Waldron Island.

You are not permitted a couch on your porch

In Boulder they have some interesting restrictions on outdoor furniture. You are not permitted to have any upholstered chairs, couches or mattresses on your front porch or in your front yard. This law might sound odd but it has a good purpose, to keep local college students from setting these items on fire, as they are apparently want to do there.

Boulder is not the only city to do this, it has also caught on in Lincoln, Nebraska; Columbia, Missouri and Ames, Iowa.

No dirt, sand, rock or cement allowed on private property

This is one of those laws that is not enforced, mostly because that would be impossible. Southern California is a drought stricken area in which people are encouraged to landscape with things like rocks. So to make that illegal, seems, well, odd.

If you were to look up homes for sale in Walnut, chances are good you will find that most are breaking this law.

Unlike the others on this list, this one is not a restriction but rather a day for everyone to appreciate the finer things in life, like log cabins. This special day has been on the books since 1989.

It is illegal to throw snowballs at your house

This is the worst example of strange laws on the books because it is designed to suck the fun out of winter. Snowballs are a no-no here with you not permitted to throw them at all in public, whether it is at a building or a person.

No burglar bars outside your house windows

There is only one exception to having burglar bars in place on the outside your home, and that is if they were placed there before 1996. If you want to put these security bars on the inside of your windows however, that is permitted.

As you can see there is no shortage of strange real estate laws on the books in the United States. If you are planning a move you might want to look into what strange laws pertain to the area to which you would like to move. You just never know what you could end up getting in trouble for.